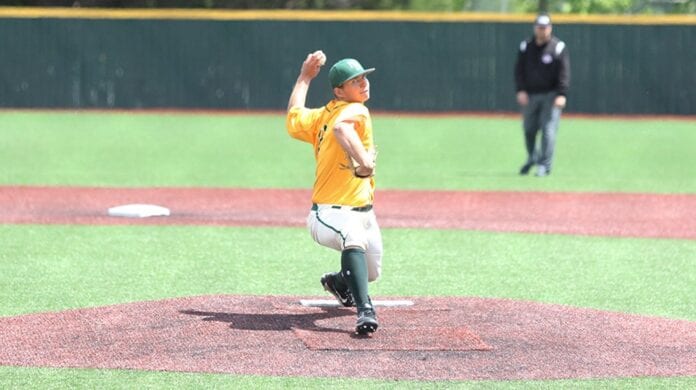 JOPLIN, Mo. — The Missouri Southern baseball team led 4-3 going into the bottom of the ninth inning, but Central Missouri rallied for a 5-4 win over the Lions today in the MIAA Baseball Tournament semifinals.

Southern (35-19) will await its fate for the NCAA Baseball Tournament as the pairings will be announced tonight at 9 pm on www.ncaa.com. The Lions made a trip to the NCAA Tournament last in 2015 when Southern went 40-14 on the season, winning the MIAA regular-season and postseason championships.

Offensively, Mike Million led the way today, going 3-for-4 with a pair of runs and an RBI. Matt Miller and Ryan Hunter both had a home run, while Denver Coffee, Dan Lenz and Troy Gagan had a hit each. Coffee Drove in a run, as well.

Brennon Covington started and went two innings, striking out three and walking none and gave way to Joey Reeves in the third. Reeves pitched masterfully, throwing six and a third innings of relief, limiting the Mules to just two runs, while striking out five to suffer the hard-luck loss. Reeves threw nine innings of relief in the past two days for the Lions.

Central Missouri (37-14) got three hits each from Erik Webb and Harrison Schnurbush with Mason Janvrin driving in the winning run. Jonathan Sprinkle threw five and two thirds of an innings of relief, striking out ten batters.

Southern had homers from Miller and Hunter in the second to go up 2-0. Central got a run back in the bottom of the second and went ahead on a homer from Webb in the third, leading 3-2 after three.

Million homered off of Sprinkle in the seventh to tie the game at three and Coffee drew a bases-loaded walk in the top of the ninth to score Million with the go-ahead run.

The Mules, however, answered with an RBI double from Zach Whalin and Janvrin’s game-winning single to put the game away.

Southern will watch tonight to see where they might be playing when the NCAA brackets are released at 9 pm on www.mssulions.com. The Lions came into the week ranked 6th in the latest Central Region Rankings.