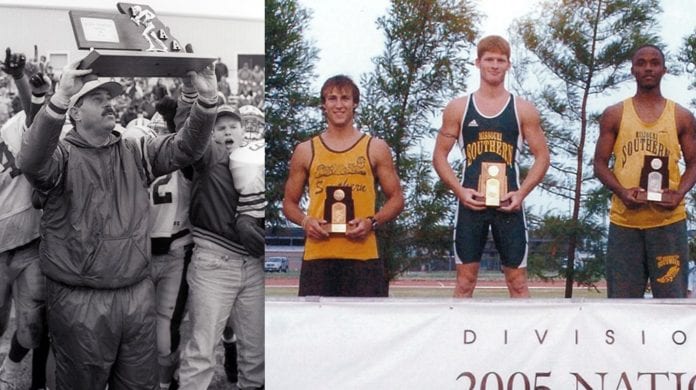 JOPLIN, Mo. — The Missouri Southern Athletic Department is pleased to announce its 2019 Hall of Fame Class as part of Hall of Fame Weekend on October 19 this season.

The newest class will be present at a social Friday evening and will be inducted at a brunch on Saturday. The group will be introduced as new Hall of Fame members at halftime of the Lions’ football game vs. Washburn that Saturday. The lunch is open to the public. Registration and a social will take place from 11 am to 11:30 am on Saturday morning in the Academic Center inside the North Endzone Facility. The presentation and lunch will begin at 11:30 am and go to just before noon, with the induction speeches beginning at 11:50 am. Fans wishing to attend need to RSVP to the athletic department at 417-625-9317. Cost to attend the event is $15.

Below are short biographies on each inductee.

Quite simply, Lantz led the Lions through their most successful period as an NCAA Division II program, including the school’s only MIAA Football Championship in 1993. Lantz finished his career with a 51-35-1 record which puts him second on the all-time coaching wins and win percentage list, only to current MSSU Hall of Famer Jim Frazier.

Lantz led the Lions to a 9-1-1 record in 1993 when the Lions went undefeated through the MIAA and advanced to the NCAA Tournament where Southern would fall to Minnesota State. During that season, the Lions would have a season-opening tie and then run off nine-straight wins en-route to the post season and a final No. 6 National Ranking.

Lantz led the team to a winning record in all but two of his seasons, including eight wins in 1991, seven in 1997 and nine in 1993. He coached seven current MSSU Athletic Hall of Famers including Albert Bland, Cedric Florence, Ron Burton, Rod Smith, Matt Cook, James Thrash and Yancy McKnight.

Lantz went on to serve as the Director of Student Services at Ozark Christian College, as well as the Vice President for Student Services at Northeastern Oklahoma A&M. Coach Lantz passed away in 2007 and is survived by his wife, Charlene and his son Paul.

Most individuals that get inducted into a Hall of Fame do just that, go in as individuals, but Campbell, Rutledge and Turner will forever be remembered as one of the most dominant groups of pole vaulters that the NCAA Division II has ever seen. The trio went 1-2-3 at the 2005 NCAA Division II Outdoor Track and Field Championships with Campbell winning the National Title, Turner finishing second and Rutledge finishing third. Their story cannot be told without mentioning that fact.

Campbell went on to graduate from MSSU in 2006 with a degree in criminal justice and left the Lions as one of the most decorated vaulters ever. He was a six-time MIAA Athlete of the Week, a three-time Indoor MIAA Pole Vault Champion, a two-time MIAA Outdoor Pole Vault Champion and a two-time team MVP. He was the 2006 MSSU Male Athlete of the Year.

Campbell holds the current MSSU school record in both the indoor and outdoor pole vault and was a two-time NCAA All-American, winning the National Championship in the 2005 outdoor season and the 2006 indoor season.

Campbell married his wife Lisa (a former All-American pole vaulter at Pittsburg State) and the couple has two children. He currently serves as a project manager at Star Lumber in Wichita, Kan.

Rutledge was no stranger to the Green and Gold when he joined the track and field team at Southern, having watched first-hand his father and fellow MSSU Hall of Famer, Tom guide the Lions as the head coach. Rutledge graduated in 2006 from Missouri Southern with a degree in business and left a legacy as an eight-time national qualifier to the NCAA Championships, qualifying for the indoor and outdoor championships in 2003, 04, 05 and 06.

He was a three-time All-American earning honors in 03, 04 and 06 and was the National Runner-up in the 2006 indoor meet, while taking third at the 2005 outdoor meet. The apex of his career came when he reached a No. 25 national ranking after graduation with a vault of 17-08.00 at the KU Relays.

Since graduation, Rutledge went on to be an assistant coach at MSSU, before moving on to Missouri S&T, and currently serves as an Associate Head Coach at Pittsburg State. Rutledge is married to his wife Natalie and the couple has three children, Emery, Quinn and Cash.

Turner came to Missouri Southern as both a football player and track and field student-athlete. As a freshman on the football field, Turner, a walk-on led the Lions in receiving yards. He went on to finish his football career with 81 receptions and 1,146 yards. But it was on the track where he made his name. Turner was an All-American, competing in a wide range of events, including the 400m, 100m, hurdles, pole vault, long jump, high jump and relays. As a sophomore, Turner was the MIAA Champion in the decathlon. The same year he was the National Runner-Up in the pole vault, Turner just missed out on All-American honors as a decathlete.

Turner graduated with a degree in business from Missouri Southern and had two minors in human resources and quality management. He currently works at Tateho Ozark Technical Ceramics in Webb City as an Account Manager. He has three children.

The 1981-82 MSSU women’s basketball team will go down as the team to advance the furthest in post season play as the Lady Lions went to the National Championship game and ended up being the NAIA National Runner-Up. 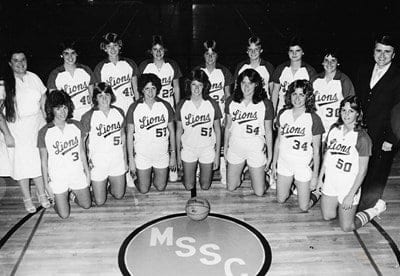 The team was coached by Jim Phillips who is in the MSSU Athletics Hall of Fame and featured future Hall of Famers in Brenda Pitts and Pam Brisby. The team went 23-12 and finished fourth in the CSIC but lit up in the post season. The Lady Lions won the Area IV Tournament with a thrilling 59-57 win over Grandview. Southern won the first two games of the National Tournament over Charleston and Berry, before falling to Southwestern Oklahoma in the National Championship game.

Click here for a complete roster of the 1981-82 women’s basketball team.

The 1999-00 men’s basketball team is the best basketball team to wear the Green and Gold to date. The Lions finished the season 30-3 under Hall of Fame Head Coach Robert Corn and advanced to the NCAA Division II Final Four, falling to eventual National Champion Metro State. The team also featured future NCAA Division I Head Coaches in Chris Lowery (Southern Illinois – Carbondale) and Paul Lusk (Missouri State) as Corn’s assistants. Two members of the team, Eddin Santiago and Terry Shumpert, are already in the Hall of Fame as individuals. 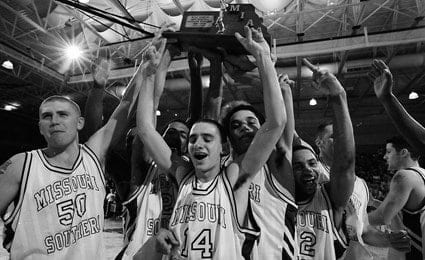 The Lions started the season with nine-straight wins, before losing on the road at Washburn. Fifteen-straight wins followed that setback before a regular-season loss against Northwest Missouri. The Lions then swept through the MIAA Tournament and the NCAA South Central Region Tournament, both of which were hosted at the brand-new Leggett & Platt Athletic Center.

Southern drew No. 1 ranked Florida Southern in the opening round of the NCAA Elite Eight where the Lions would shoot 42 percent from the field and 44 percent from long-range en-route to a 76-65 win over the Mocs. In what many called the “actual” National Championship, the Lions fell in a heartbreaking thriller to Metro State 75-74 in the Final Four. The team is all over the MSSU record books as three on the squad (Terry Shumpert, Eddin Santiago and Carlos Escalera) were all 1,000-point scorers and are in the top-20 of the all-time scoring list. Santiago is the all-time leader in assists and steals, while the team holds records for most wins (30), fewest losses (3), win-loss percentage (.909), home wins (18), consecutive wins (15) and consecutive home wins (18). The Lions were also just one of three MSSU teams to ever finish the regular season undefeated at home.

The Missouri Southern Athletics Hall of Fame was established to pay tribute and give deserved recognition while enhancing school tradition by honoring former athletic letter winners and/or coaches who have shown distinctive, unique or exceptional ability while at Missouri Southern or since graduation. The honorees must be graduates of Missouri Southern and there must have been a lapse of at least 10 years since the individual last participated in athletics at Southern.

With the addition of the 2019 class, the MSSU Athletics Hall of Fame now includes 127 members and five teams.