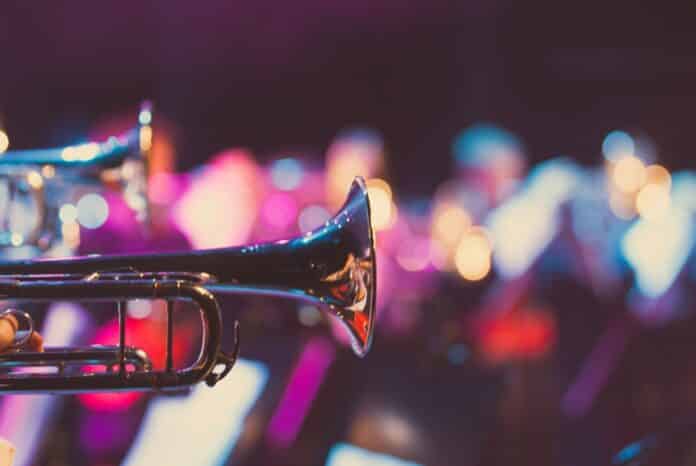 On behalf of the Carthage Tiger Pride Band students, staff and parent booster organization, I say a hearty and heartfelt thank you to those who participated in, supported, sponsored and attended the 54th Annual Marching band festival.  Twenty-four bands from three states converged on Haffner stadium for competition that started at 11:30 am and lasted until after 10:00 pm.  Over 1,950 area high school students took the field Saturday to compete in 8 minute shows combining music, marching and colorful staging and effects.  Ten top bands from preliminary competition performed under the lights in finals.  Logan-Rogersville took the top prize in finals competition.  Lebanon High School won the sweepstakes prize, based on combined parade and field competition. The band from Arkansas City, Kansas, under the direction of Carthage native Chris VanGilder, made the longest journey to compete.

The theme of this year’s Maple Leaf Festival prompted the booster organization to look back to the original 1966 Four States Marching Band Festival started by CHS Band Director Robert W. Stanfield.  Thirteen bands participated in that original marching festival, including the Carthage High School and Junior High School bands.  Prior to the field competition, a parade consisting of a total of 30 bands and other units marched in a short downtown parade.  Bands from Seneca, Sarcoxie, Monett, Nevada and Carthage participated in both the 1966 festival and this weekend’s event. The venue has changed and the number of bands and band members has grown.  The size of the audience that had assembled by the time the Tiger Pride band gave their exhibition performance at 6:00 pm surely was second only to the graduation ceremonies that have been held at Haffner stadium the past two years.

The values that our band students learn from preparing for and competing in marching competitions has never changed.   In researching the Legacy of Maple Leaf, I found these two especially insightful items from the Carthage Press.  The first is from Marvin VanGilder’s Musical Notes column after the 1967 festival.  The second is a letter to the editor written by Bruce S. Robertson after the fourth festival in 1969.  Many of the sentiments contained in both pieces could have easily been expressed after this year’s event.

“Musical Notes: Opus 273- The Four-State Marching Band Festival held last Saturday at Public School Stadium was perhaps the most brilliant and skillfully managed musical spectacular ever seen in Carthage or the district.

The presence of Marching Mizzou and the U.S. Navy band from Memphis of course added a great deal to the event and served to attract an even larger crowed than was the case a year ago with the first annual festival.

It is particularly noteworthy that every band entered in competition was an outstanding, carefully trained, determined ensemble geared to a high level of musicianship and equally well-versed in the techniques of showmanship.

Even the bands which received the lowest ratings given were excellent by any standard and it is regrettable that every unit could not have received a trophy.

This in an expression of the opinion of this writer but also of many other witnesses, including many of the members of the service band and the university band and several distinguished visitors.

Most of the bandsmen also displayed high regard for their competition, as well as harmonious effort within their own ranks.  This was especially true of the host members of the Carthage Senior high school and Carthage Junior high school bands, who sat in a group and offered sincere and enthusiastic applause for every worthy achievement of every visiting ensemble.

The Carthage bands were not entered in trophy competition but did perform for ratings, receiving the highest given, and did display their skills for the benefit of an appreciative audience.  In both cases their performances were outstanding, in the view of this writer, the judges, members of the other bands and spectators in general.

Robert W. Stanfield, instrumental supervisor in the R-9 schools, director of the CSHS band and director of the festival, and I.D. (Jack) Newton, director of the CJHS band, have done unusually outstanding work.  Although we have come to expect this of both men, certainly we should again offer our praise and thanks.

The festival was a major key to the success of the quasqui-centennial celebration and provided another boost to the development of musical excellence not only in the R-9 schools but in all schools of the district.

Our hat is off also to Larry Sanborn and the neighboring Jasper R-5 band and to Dean Salchow and the Webb City R-7 ensemble, both of which made excellent appearances.

We anticipate that in future years, the festival will continue to grow and that we will see the time when one day will not provide adequate time to complete all events.

The Carthage bandsmen who themselves provided vital assistance toward success of this year’s festival, have every reason to be proud of their effort and to understand that they have made an important contribution to the welfare of their community and their art.

At the festival, they were bone-tired, having rehearsed long hours, entertained Marching Mizzou members overnight, sold tickets and otherwise assisted with festival preparations and played a major role in the previous day’s observance of CSHS homecoming.

Yet their performances were nothing less than stellar.

This is the kind of devotion and determination which is learned in any properly supervised musical ensemble and the demonstration of it again proves the vital importance of music education in the life of every growing individual.”  Carthage Press, October 27, 1967.

There were bands, bands and more bands.

They were high school bands, precision marching bands and football half-time performing bands.  The performers themselves came in assorted sizes.  The uniforms were of different colors.  The cadences ranged from deliberate slow-step to the fastest quick-step.  Schools from four different states were represented.  Despite all these dissimilarities, there was one overwhelming goal-to excel, to do one’s very best, to make the weeks and weeks of hard work pay off.

Anyone who has, as this writer has, attended all four of these affairs, finds himself asking the question, what is it that motivates these young people to strive for such excellence.  The answer lies somewhere close to the concept of legitimate impersonal sense of pride of performance, of being a credit to one’s school and to those who works with them.

Standing ovations do not just happen.  Few except parents realize the strenuous rehearing schedules set.  Seven o’clock in the morning arrivals on heavy dew-laden fields, going through the same routine over and over again until all the bugs are ironed out, are all taken as occupational hazards of a band member.

Then, there is a vast difference between a contest and a competition.  On the same field the night before we witnessed a football game in which the elements of offense and defense are a part of the game.  However, in a band competition you just can’t run out and tackle a competing third trombone player as he crosses the treacherously muddy 45-yard line.  There’s nothing you can do to the other guy: you only compete with yourself in band competition.

As for the fourth Four-State Invitational Marching Band Festival itself, the size of the audience which came despite threatening weather and the number of participating bands is a great credit to the man whose vision started and has perpetuated these affairs, Robert W. Stanfield.

His designing of the routine for the 1812 Overture brought this comment from a visiting director, “The Tchaikovsky number is hard enough to play sitting down, let alone trying to march to it.”

In this day and age, it also is a great credit to the R-9 school board program, to the Chamber of Commerce and the city and to the 4-state area when an affair such as this festival, which stresses basic positive virtues, can be presented.-Bruce S. Robertson” Carthage Press, October 1969.

Thank you to the Carthage Schools and Community for continuing to support the Carthage Bands and the Maple Leaf Marching Band Festival!  Our booster organization has created a Facebook page where we posted photos from the various shows throughout the day.  Visit the 54th Annual Maple Leaf Marching Band Festival-Carthage, MO on Facebook to see those.   We have also created a page for CHS band alumni, Carthage-MO Tiger Pride Band Alumni to connect and share band stories both old and new. We are already looking forward to number 55 in 2020!

artNotes from Hyde House: WEALTH is the COMPANY YOU KEEP