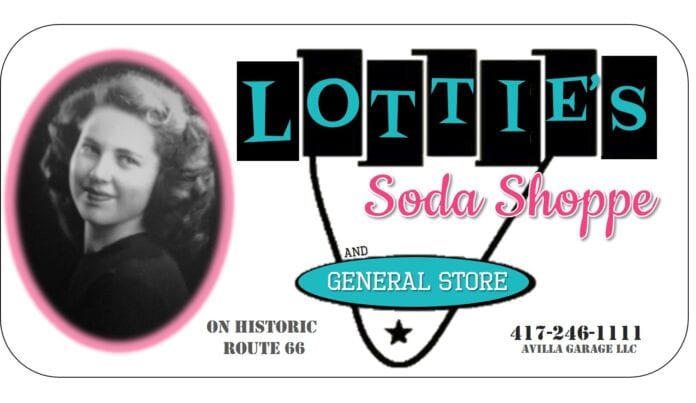 This little stop along Route 66 is a must-see with its locally made goods, art and homemade food; but Lottie’s Soda Shoppe also tells the story of a love that has echoed for three generations.

Since its opening in June 2020, owner Matt Mathews said the shop – named after his mother, Lottie Mathews, 89 – also honors the memory of his father, Col. Valgene Mathews who passed away in 2008. The shop occupies the same building where Valgene worked as a mechanic in the 1950s at Avilla Garage, and serves as a tribute to the love that sparked while Lottie was a soda jerk in Carthage.

In March 2021, an Airbnb was added under the name of Ramona’s Room (in honor of Valgene’s sister) and another called Hubert’s Parsonage (for Valgene’s uncle). Time has changed so much, and continues to do so with the shop and its close-knit community.

“It’s a community service,” Matt Mathews said. “Originally, it was just going to be a little soda and ice cream shop. Then we started seeing other needs in the community and it’s grown from there. We’re there to help and that means some jobs for local young people, lunch for a good price, and a place for people to sell their locally made goods.”

The shop – located right off on the well-beaten path through Avilla – has convenience store groceries, drinks, coffees, meat, handcrafted gifts, locally written books, and lunch specials six days a week. The Airbnb is available to rent by calling the shop or by clicking here.

Stephanie (Mathews) Lee, a granddaughter of Lottie’s, manages the shop and loves everything it represents.

“Honoring Grandmother, the family and keeping Papa’s memory alive are huge,” Lee said. “She’s a woman who has done so much for so many people, worked hard her entire life and it’s all been in the shadows, it’s nice to give her some recognition as well as share some of the critical values and ethics that she has stressed to her kids and grandkids. Things today’s kids don’t see or hear enough about – faith, family, hard work and fortitude.”

Lee enjoys sharing family history – much of which can be seen on the shop’s Facebook page – and can be viewed on the walls of the shop. The exterior walls of the shop certainly attract travelers’ eyes with the beautiful mural work of local artist Rachel Wilson, whose work is also seen just west of the shop on Avilla’s community building. The colorful spot has drawn the attention of Route 66 travelers – click here https://www.youtube.com/watch?v=eUPOIcCXlys to see a YouTube video from a visitor last year.

To follow the shop, learn more local history and some of Lottie’s recipes, and future announcements – find Lottie’s Soda Shoppe on Facebook.

Col. Valgene Mathews went home to be with his Lord on Aug. 17, 2008. He left behind many friends and loved ones at his favorite coffee shops and sales barns. Col. Mathews was born March 3, 1921, to Herbert V. Mathews and Ethel L Zinn Mathews. He grew up along the banks of White Oak Creek and Spring River, and graduated from Sarcoxie High School in 1939. Col. Mathews joined the Army Air Corps on July 2, 1942, and flew 35 missions in Europe as a B-17 pilot with the 95th Bomb Group 336th Squadron. After WWII, he joined the Air Force Reserves and commanded the 304th Military Airlift Squadron before retiring as a full colonel with 32 years of military service. Valgene married Lottie Westfall on Oct. 17, 1954. They had two children, Matt Mathews and Vali S Watts, of Carthage, Mo.; seven grandchildren: Nikole (Mathews) Bradshaw, Airman Staff Sargent Andrew Watts, Crystal (Mathews) Steen, Victoria (Mathews) Youngblood, Rebecca (Watts) Haines, Stephanie (Mathews) Lee and Chad Mathews; and (as of 2008) two great-grandchildren, Hannah Bailey and Lottie Youngblood.

Valgene was preceded in death by his parents and brothers, Raymond Mathews and Rezin Mathews. His sister, Ramona Schlichting, lives in Springfield, Mo.

Valgene and Lottie owned and operated a cattle ranch near Carthage. He was a member of the Avilla Baptist Church for 87 years. Valgene was a Carthage Rotarian and longtime member of the Missouri and National Cattlemen’s Beef Association. 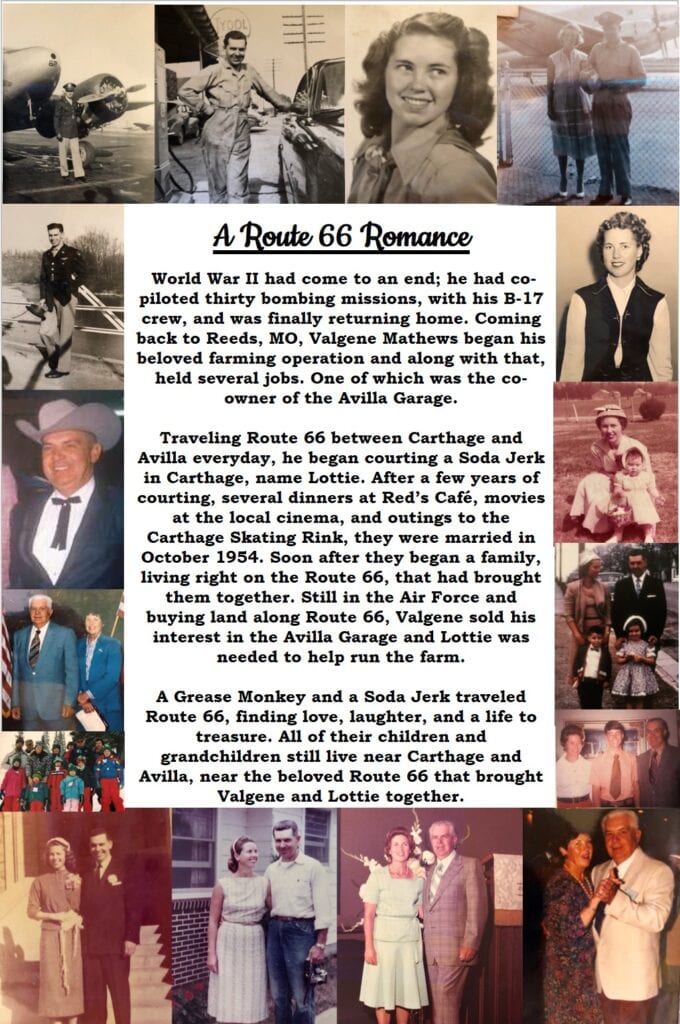