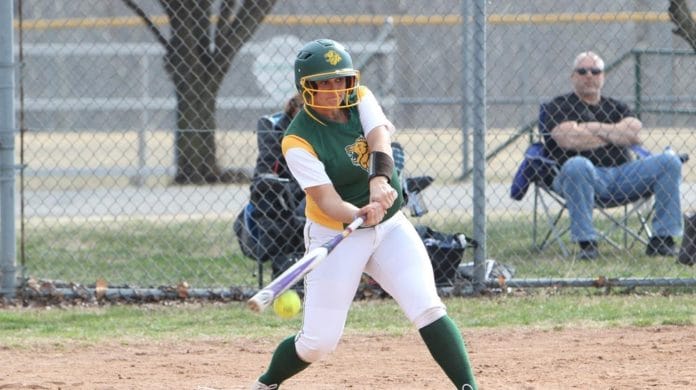 CLINTON, Miss. — The Missouri Southern softball team put up a combined 11 runs against Drury and Mississippi College, but the Lions fell to the Panthers, 8-7 before dropping game two to the Choctaws 8-4 to close out day one inside the MC Softball Complex Saturday afternoon.

The Lions fell behind early to Drury by three runs heading into the fourth until Elizabeth Windsor put the ball in play which allowed two to score on the fielding error. Then Tori Frazier scored the tying run while Windsor stole second to end the fourth at 3-3.

The Panthers responded with a three-run inning in their half of the fourth, but not enough of a disadvantage for the Lions as Ashley Caldarella hit one into right field for a double, scoring two runs in the process to once again pull to within one.

In the fifth, Sidnie Hurst registered a sacrifice fly followed by Windsor singling in the go-ahead run to give the Lions their first lead of the game at 7-6. DU tied it up in the bottom half and then took the lead for good on a sacrifice fly in the sixth.

Freshman Josie Tofpi went 3-for-4 with a run scored to lead the team in hits. Both seniors Lexi Ferrari and Caldarella recoded a 2-for-4 game with Caldarella adding two doubles.

Junior Erika Lutgen homered in the first inning to give Southern a 1-0 advantage, but Mississippi College quickly launched a bases-clearing double to right center to go up 3-1 in their half. The Lady Choctaws slowly extend their lead by tacking on a run in the fourth, fifth, and sixth after driving in two others in the second.

Tofpi and Angel Badalamenti added two hits while Ferrari knocked in two RBIs. Caldarella also lifted one to deep left field in the fourth to get the Lions within two (5-3).