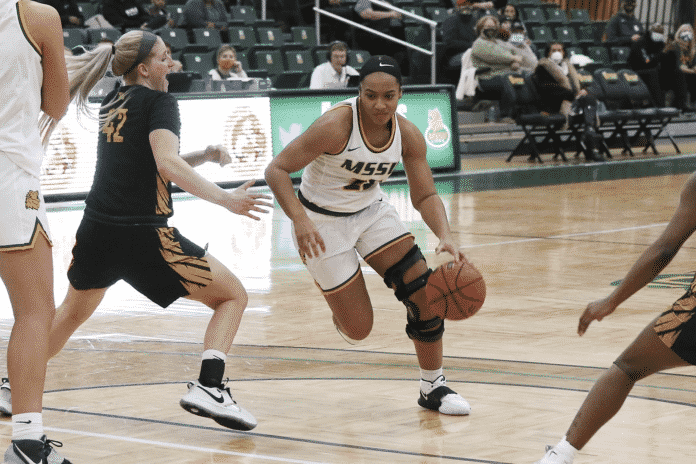 Joplin, Mo. – The Missouri Southern women’s basketball team had four score in double-figures, but the Lions couldn’t overcome a first-half deficit and fell at home to Pittsburg State, 78-60 today.

Southern (7-13) was led by 14 points from Amaya Johns as she added seven rebounds off the bench. Carley Turnbull scored 13, while Hailey Grant scored a career high 12 points on 4-of-8 from the field. Madi Stokes scored ten and pulled down nine boards with two blocks. The two blocks give her 43 on the season and put her in second-place all-time on the single-season block list.

The Pitt run reached 20-2 as the Gorillas led 38-18 halfway through the second quarter. A three from Johns with 18 seconds left made the score 46-22, but a PSU late bucket made the halftime score 48-22.

A layup from Megan Jackson off an assist from Turnbull got the Lions within 17 (72-55) with 5:41 to go on the clock and a pair of free throws from Johns with two minutes to go got Southern within 18 (76-58) but that would be as close as they would get.

The Lions shot 84 percent from the free throw line and out rebounded the Gorillas 42-38 in the contest. Points in the paint were even at 28, while the Southern bench out-scored the Gorillas’ 29-19.

Southern will be back in action this Thursday when the Lions play host to Washburn. Tip off from Robert Corn Court inside the Leggett & Platt Athletic Center is set for 5:30 p.m.