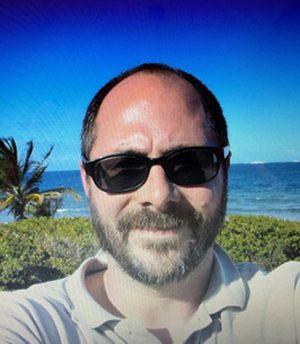 He was preceded in death by his parents. Thom is survived by his son Thomas Kyle (Rose) Hanrahan of Cheney, KS, two grandchildren Mia Clodie and Aida Rose of Cheney, KS, his brother Mike Hanrahan (Stacey) of Kearney, MO, nieces Serra Hanrahan and Gloria Quick (Cole), and many aunts, uncles, and cousins.

Thom had many jobs he loved over the years, but among his favorites was working for The Chart, the campus newspaper for Missouri Southern State University in Joplin, MO. Known as T.R. at most of his collegiate stops, he was twice student editor for The Chart. He also had a stint as advisor from 2006-2011. His passion was teaching and working with his students. He was instructor of journalism and advised The Griffon, the yearbook at Missouri Western State University. He worked as Managing Editor for the Brownwood Bulletin daily newspaper in Brownwood, TX. Though they had different political ideas, he enjoyed the people of Texas, and they enjoyed his style of positive news reporting. He also worked as sports reporter in St. Joseph for News-Press NOW where he covered the Chiefs and the local St. Joe sports teams. He enjoyed covering the Chiefs, but preferred high school sports. He promoted prep sports to anyone who would listen. His final journalism stop was Sports Editor for The Courier Tribune where he covered high school sports for Liberty, Liberty North, Kearney, and Smithville. He was popular with the student athletes because he treated them with respect and admiration. His favorite jobs were those working with high school and college students. He truly loved his “kids” (students), the coaches, and student-athletes he covered.

Thom was extremely proud of the Puerto Rican heritage from his mom’s side of the family. He visited the island several times, and recently considered moving there. He seemed his happiest when he was there. He will be sorely missed by family and the friends. Many of those friends are former students who kept in touch over the years. One of his great thrills was being on stage at graduation to hand son Kyle his degree from Missouri Southern State University. Thom will be remembered for his quick wit, his compassion, and his faith in America’s youth. Stories of his kindness have poured into the family this week. His life was short, but his contributions were many.

A visitation to honor Thom will be held on Tuesday, October 26, from 12-2:00 p.m., with a Celebration of Life to follow, at 2:00 p.m., both at the Speaks Suburban Chapel, 18020 E. 39th Street in Independence, MO. The service will be livestreamed via Speaks Chapels page for those who would like to virtually attend his service. In lieu of flowers, donations can be made in Thom’s name to the Missouri Southern State University journalism department. Online condolences may be expressed to the family at www.speakschapel.com (Arrangements: Speaks Suburban Chapel 816-373-3600).