The Missouri Veterans Hall of Fame is proud to announce its 2021 inductees.  Inductees require a Missouri connection, honorable military service, and must have contributed exceptionally to the community, the state and/or the nation.  The 2021 class inductees are:  James M. Eddleman, Perryville, Missouri, John A. Gordon, Columbia, Missouri, Velma Bippen Jesse, St. Louis, Missouri, William L. Miller, Sr., Washington, Missouri, James B. Tatum, Anderson, Missouri, and John G. “Jack” Waggener, Charleston, Missouri.  The induction ceremony will be held on October 29, 2021, at 2:00 pm in the Rotunda at the Capitol, Jefferson City, Missouri.  The public is welcome to attend the ceremony.  Mask wearing requirements will be IAW CDC guidelines.

JAMES B. TATUM:  Jim was born in Carthage, Missouri, and entered military service with the U.S. Army in 1947 as an infantry officer.  He was part of the landing on Inchon and the Company he commanded was one of only two companies to fight their way to the Yalu River.  For his actions, he was awarded the Bronze Star with Valor, two awards of the Purple Heart, and the Combat Infantry Badge.  He was active in his community after his return and was especially committed to education.  He co-authored the legislation creating community colleges in Missouri and led the campaign to acquire the land Camp Crowder occupied and turn it into Crowder College which opened in 1963.

JAMES M. EDDLEMAN:  Jim was drafted into the Army in 1966 and fought in the Tet Offensive.  As he transported the severely wounded to medevac helicopters, he promised himself that, if he survived, he would find a way to honor his comrades who died.  This promise ultimately led to the planning of Missouri’s National Veterans Memorial in Perryville.  Jim and his family generously donated 47 acres of their 48-acre family farm and much of his savings.  After much hard work, his vision of recreating the Vietnam Memorial in Perryville became a reality and the wall officially opened in May 2019.  Jim has been an active Board Member since its opening.

JOHN A. GORDON:  John Gordon was a Missouri native and honors graduate in physics from the University of Missouri in 1968.  He was a member of the ROTC program and was commissioned as an Air Force officer after graduation.   His early assignments were as a physicist and research associate, and he ended his military career as Deputy Director of Central Intelligence for Military Support in the CIA.   After retirement, John worked as a civilian with the Department of Energy and served as an Assistant to the President and Homeland Security Advisor.  John was recognized by the University of Missouri multiple times for his accomplishments and served as Grand Marshal of Mizzou’s Homecoming in 2020.

VELMA BIPPEN JESSE: After losing a friend at Pearl Harbor, Velma was compelled to serve and joined the Women’s Army Auxiliary Corps.  She later reported for active duty in the Women’s Army Corps and was stationed at Camp Upton in New York where she served as a Mess and Supply Sergeant.   Her unit supported the military convalescent hospital for wounded coming back from Europe.  In October 1945, Velma and 11 friends started the first all-women American Legion Post in the country.  St. Louis Service Women’s Post 404 received its Charter in 1946.  In 1948, the Post presented President Truman with the ceremonial shovel for the ground-breaking ceremony for the Gateway Arch National Park.

WILLIAM L. MILLER, SR:  Bill was raised in Washington, Missouri and graduated from the University of Missouri in 1951.  He enlisted in the U.S. Army two weeks after graduation and was sent to Japan.  He volunteered to go to Korea and served as an artillery forward observer with the 3rd Infantry Division.  Bill returned home after the ceasefire and started working at his father’s newspaper, The Washington Missourian.   Bill has been a fierce advocate for journalism, his hometown community, and his veteran community.   He was instrumental in establishing a Missouri Photojournalism Hall of Fame, a Korean War Memorial in his hometown and a Junior ROTC Program at the two high schools.

JOHN G. “JACK” WAGGENER:  Jack Waggener was raised in Charleston, Missouri and attended the U.S. Military Academy.  He served from 1948 to 1976 and was a combat veteran of both the Korean and Vietnam conflicts.   He was commanding officer of the 45th Engineering Group in Vietnam and a commanding general at Ft Leonard Wood.  The west gate at Ft Leonard Wood is named after him.  After retirement, he was very active in Rotary in Cape Girardeau and at the Lake of the Ozarks and in the Association of the U.S. Army.  Jack served as a member of the Osage Hospital Board for 8 years and advised Representative Ike Skelton on issues concerning Base Realignment and Closures. 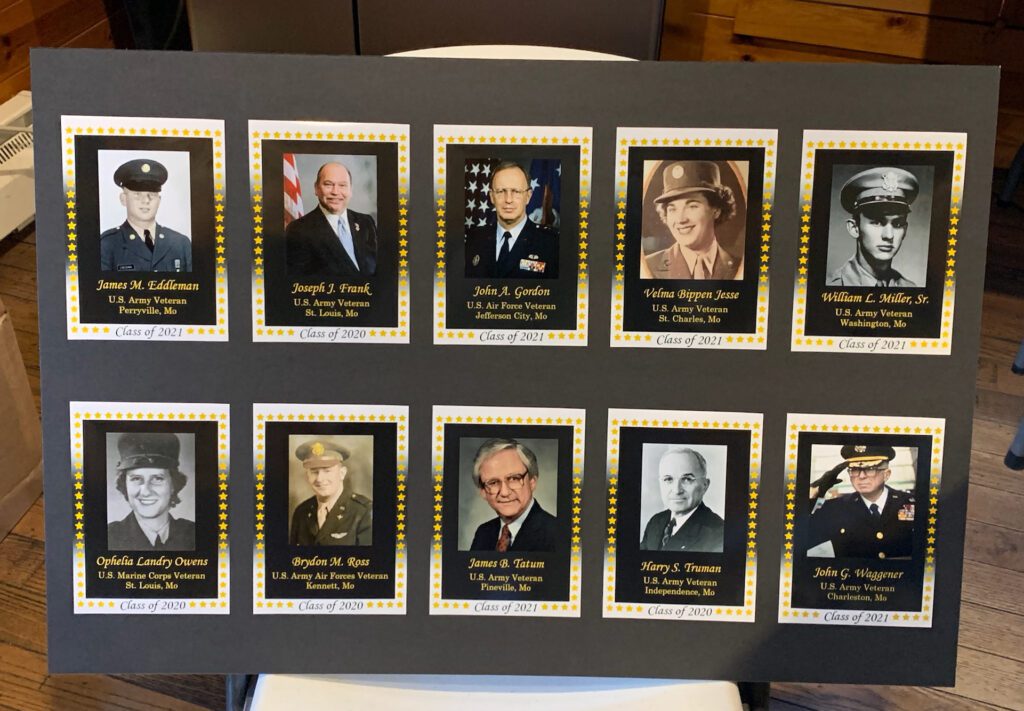