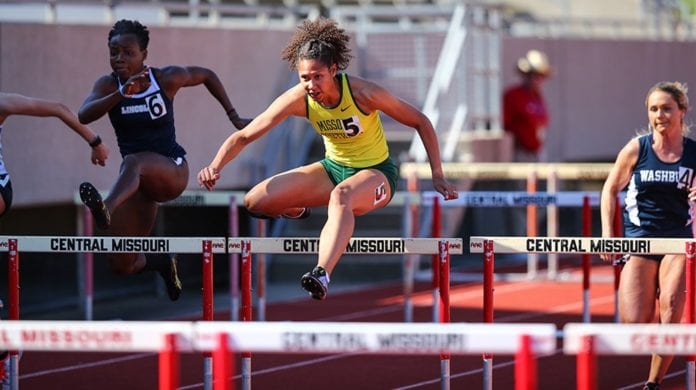 WARRENSBURG, Mo. — The No. 2 ranked Missouri Southern women’s track and field team narrowly missed out on an MIAA Championship as the Lions battled to the closest-ever finish in MIAA Outdoor Track and Field Championship history today.

The Lions were 1.2 points behind Pittsburg State going into the final race of the event, the 4x400m relay, and despite the Lions finishing in front of PSU, Southern finished just shy by the narrowest of margins in the final team standings.

“I’m incredibly proud of the way our women competed this weekend,” said head coach Bryan Schiding. “We had multiple school records, NCAA qualifying marks and personal bests. The Ladies fourght all the way to the end. It came down to the 4x400m relays and we ended up on the short end of the stick by the lowest margin in MIAA history. I can’t say enough about this team.”

Wynter Nekola started things off with an All-MIAA finish in the high jump, finishing third with a height of 5-06.50. Kirsten Leisinger was third in the hammer with an NCAA provisional and All-MIAA distance of 183-06. Alexandra Rodriguez was fifth.

Janna Hautala and Danielle Prince finished sixth and seventh in the 3k steeple, while the 4x400m relay team of Ray, Adeoye, Deiajuane Watts and Smith placed sixth in a time of 3:50.52.

A complete list of the All-MIAA performances from this weekend is listed below. The Lions will have one final meet at Emporia State on May 11, prior to the NCAA Division II Outdoor Championships.