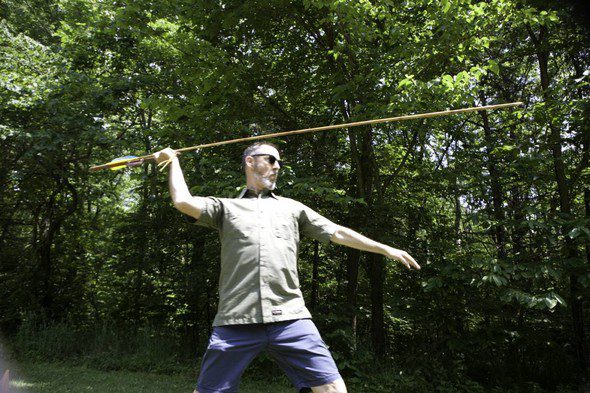 The atlatl is an ancient hunting tool that still fascinates people today.

People can learn more about atlatls and get a chance to test their own accuracy with this ancient hunting device at a free Missouri Department of Conservation (MDC) program: “Primitive Skills: Introduction to Atlatl” from 9-11 a.m. on Sept. 17 at MDC’s Shepherd of the Hills Conservation Center. People can register for this program at:

Atlatls are used to throw spear-like darts and were first used thousands of years ago when large mammals such as mastodons and wooly mammoths were among the animals humans hunted for food, clothing, and utensils. It’s unclear in which part of the world the atlatl was first developed, but they were used by ancient hunters around the globe, including here in North America. Ancient hunters understood enough about physics to know this throwing device added greater force to a spear than could be achieved by merely throwing it with one’s arm. This increased propulsion that came from an atlatl-launched spear resulted in an effective hunting tool.

At the Sept. 17 program, MDC Conservation Educator Jordan Poe will provide tips on how to use an atlatl. Participants will also have opportunities to test their atlatl skills by throwing at targets. Atlatls are legal to use for deer hunting during the archery and alternative methods portion of Missouri’s deer season. Archery season is in two segments, Sept. 15-Nov. 11 and Nov.23-Jan. 15. The alternative methods portion is Dec. 24-Jan. 3. More information about these hunting seasons can found in the “2022 Fall Deer and Turkey” hunting booklet that can be found at all MDC offices, most places that sell hunting permits, and at mdc.mo.gov.